aah...Experience the unique healing gifts of... 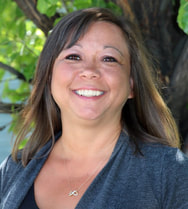 
Stacie's journey in the natural health care field began over 25 years ago. Her experience includes iridology, muscle-testing, hands-on-healing, essential oils, herbs, and nutrition. She is the owner and president of All About Health, Inc. that focuses on natural health care services, workshops, and products which she opened in 2002 to help people improve their health naturally.

She was exposed to some natural practices as a child, but it wasn’t until her daughters experienced some significant health issues that caused her to lose faith in the medical profession and she began opening her Mind to other options. This was the precursor that strongly guided her into this field.

In 2001, she was introduced to an alternative method of healing using the signal system in the feet. She subsequently took classes and certified in this modality. Shortly after, she quit her corporate job and opened All About Health. Her idea of healing drastically changed and her health and the health of her family significantly improved. She continued her education and soon became an instructor of this technique.

In 2006, she opened the All About Health Wellness & Education Center in Meridian, Idaho. In addition to services and workshops, she offered rooms for practitioners and a classroom for rent. At this time she was also on the board of the Idaho Coalition for Natural Health, which was instrumental in protecting the Idaho law related to natural health care. Through this position, she was able to network with a large group of natural health care practitioners in this area. She also became a certified practitioner and instructor of an energy technique called Quantum Touch. Although she still believes that the Center was a great concept, the practitioners at that time did not have a lot of revenue and although her clientele was excellent, she was struggling to get students to her workshops. Overhead proved to be too high so she closed the Center in 2008 and moved her business back into her home.

2008 was also a monumental year for her in another way when she branched off and created the Prime Meridian GoldZone™ (via the feet) technique. She took what she had learned from the previous program, conducted extensive research about the human body, incorporated her experience in energy healing, and created this significantly advanced method.

She eventually learned to listen to her Spirit and Trust her intuition. She felt for years that there would be something beyond the Prime Meridian GoldZone™ that she would be doing to fulfill her Path. The name Infinite Healing™ came to her in 2009 although at the time she had absolutely no idea what Infinite Healing™ was. She continued to listen to her Spirit, which led her to assemble what she refers to as her “messages from the Universe” over the years.

In September of 2011 she broke her ankle while playing softball. This was a life-changing event that not only gave her the time to organize these messages, but to implement and fine-tune many of the healing theories that she had been using for several years. Through her many years of experience in natural health care, she thought she knew how powerful the human Body is. In fact, one of the tag lines of her business is, “Never underestimate the power of your body to heal!” But the healing that she experienced with her ankle was phenomenal, and she learned more about the power of the human Body and of herself than she had ever imagined possible.

She summarized these messages into the six main Infinite Healing™ tools and the ten principles, and the first Infinite Healing™ workshop was offered in Boise, Idaho on January 7, 2012. The feedback was overwhelmingly positive. She applied these tools and principles to specific topics such as financial abundance, weight management, business building, teen life, and physical and emotional health, and presented workshops on these as well. The testimonials confirm that Infinite Healing™ is changing lives.

Infinite Healing™ has continued to evolve as she continues to receive messages and through client feedback. Although the six main tools are the same as she originally presented in 2012, they have been rearranged and reworded to get more effective results and improved for better delivery. Some of the principles have been restructured as well, and although there are concepts that are recurring throughout, she has found this is necessary to reinforce the new perspective and have people receive the most powerful outcomes.  Her first book, Infinite Healing™: Empowering You to HEAL the Negative So the Positive Can Flow Naturally was released in February, 2015. She is infinitely grateful that the dream of sharing this information with the world is being fulfilled.

She plans to publish additional books that incorporate the Infinite Healing™ model in many distinct areas of life such as financial harmony, parenting, teen life, weight management, emotional and physical health, and business building.

She calls herself a Master Healing Facilitator because she believes that it is each person’s individual responsibility to Heal. If you consistently put accountability for your healing on to someone else, whether it is a doctor, a natural health care practitioner, God, or the Universe, you will never Truly Heal. She feels she can facilitate the steps but each person is ultimately in charge of the majority of their Healing.

Using the Infinite Healing™ tools has changed her life in more ways than she can express. She now knows what True Healing looks and feels like, and has realized that it’s not as hard as we often make it out to be. Her goal is to share this new perspective with as many people as possible and help them not only Heal themselves, but help them Heal the world!

​Life is meant to be abundant in everything. Why settle for so little, especially when you could have the tools to Truly Heal? Don’t think it’s that easy? What if it is?
Quote by Stacie:
"My Path in life is to teach people how they can take responsibility of their own health - to rely on themselves first and be proactive rather than reactive. This includes providing services and educational opportunities on total health, which includes choice of foods, essential oils, herbs, water, sunshine, air, and energy Harmonizing of the physical, emotional, mental and spiritual bodies, and more!

I believe that the body is much more intelligent than it is given credit for. That is why the natural health care techniques that I use work so amazingly. Through these techniques we completely TRUST in the amazing, innate healing power of YOUR body. Only you can heal your body. Others can give you advice or place your body into a state of healing but no one can force your body to heal. As a Master Healing Facilitator I can apply the techniques and give you recommendations to facilitate healing in your body, but I cannot force it to heal. Because of the immense respect I have for the power of the human body, I don't believe that placing undue burden on one's body is in any way beneficial. Everything I do works with each person's individual body. So when I say "Never underestimate the power of the body to Heal," I mean it completely."

Never, ever underestimate the power of YOUR body to heal!

Even more importantly,
Never, ever underestimate the power of YOU!

The statements contained herein have not been evaluated by the Food and Drug Administration and are not intended to diagnose, treat, cure, or prevent any disease. This information is in no way intended as a substitute for medical counseling.